Where do avalanches happen – and why?

What is an avalanche?

Snow is deposited in successive layers as the winter progresses. These layers may have dissimilar physical properties and an avalanche occurs when one layer slides over the top of another (surface avalanche), or the whole snow cover slides on the ground (full-depth).

An avalanche may be dry or wet, according to whether free water is present in the snow. It may be of loose snow, when the avalanche starts at a single point, or a slab avalanche which occurs when an area of more cohesive snow separates from the surrounding snow and slides out. In practice, any snow slide big enough to carry a person down is important. 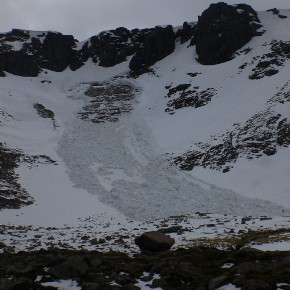 The Great Slab avalanche in Coire an Lochain

This is the most important factor in determining whether avalanches are likely and the evolution of the snowpack is entirely dependent on this. Check out our pages on where to find relevant weather information.

Many weather variables affect avalanche release and information can often be gained before setting out. The information provided on temperature, wind speed and direction often enables useful predictions to be made before leaving home. For instance, if a SW wind of 25 mph is indicated with freezing temperatures and snow known to be lying, then it may be assumed that some avalanche hazard will be building on NE-facing slopes.

When visibility is adequate, snowpack observation can begin from the roadside. Evidence of recent avalanche activity, main snow accumulation zones, fresh loading by new snow and drifting, can often be noted from below. Observations can continue on the approach, noting such details as depth of foot penetration, cornice build-up, ease of release of small slabs and the effect which localised wind patterns may have had on slab formation. Any suspect slopes which must be negotiated (bearing in mind that the safest course is to avoid them) may be tested by digging a snowpit. If you want to find out more about this, then sign up for one of our avalanche awareness courses.

Many avalanches are cornice-triggered. In general, climbing below cornices should be avoided:

When walking above cornices, take care to give them a wide berth. This photo of a cornice on Aonach Mor shows the possible fracture line. 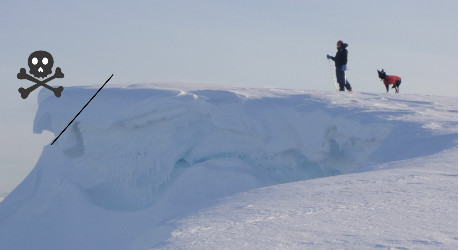 Depending on conditions, the cornice could break off even further back than the line indicated

On most hills in Britain, avalanche hazard can be avoided completely by sensible choice of route.