by Ken Thomson and Mary Webster

Born and educated in Aberdeen, Richard has been a respected solicitor in that city for many years, specialising in property and commercial work, and an official of the Society of Advocates.

Joining the Cairngorm Club in 1970, along with his wife Gill, his administrative talents and potential were soon noted, and he became Club Secretary two years later, only relinquishing that office 25 years later to become the Club’s Millennial President for 1997-2000, when he organised a re-enactment of the famous 1900 Club Meet to the summit of Mount Keen. After a few years on the backbenches, he then became Custodian of the Club’s Hut at Muir of Inverey. If you count his Aberdeen home, his family cottage near Inverey, and the homes of his two hard-working daughters in Edinburgh - both lawyers and Club members themselves, of course - he thus has no fewer than five properties on which to apply his DIY and gardening enthusiasms! 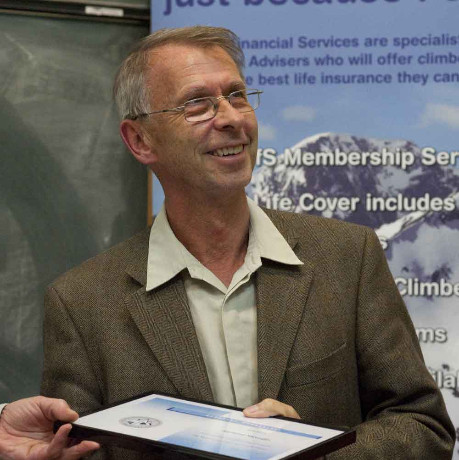 However, none of this administrative and practical activity dims his enthusiasm for walking and for the hills – preferably with as little clothing on as possible, but often with skis on foot – and he has a wide knowledge of Scotland’s mountains (Compleat Munroist no. 1418) as well as from forays abroad. He and Gill have also been stalwart supporters of the local mountain rescue associations.

For Mountaineering Scotland, Richard’s sharp mind and cheerful manner provided invaluable legal assistance and advice during the drafting of the Memorandum and Articles of Association for the then Mountaineering Council of Scotland’s incorporation in February 2007, and he performed a similar service when those Articles had to be revised in September 2010 to bring them up to date regarding the Companies Act 2006.