Mike Newbury was born in Burton-on-Trent. He began climbing on Derbyshire gritstone and in Wales in his teens. His initial climbing in Scotland was hampered by a serious fall off Tower Ridge when in his early twenties. Having lived and worked in different parts of Scotland he moved to Linlithgow and became an active member of the Forth Valley Mountaineering Club.

The Munros were completed in 2000 on Buachaille Etive Beag. Mike’s other area of interest was the Julian Alps, visiting annually since 1986. He completed and published the first guidebook in English ‘Walks and Scrambles in the Julian Alps’ in 2003. 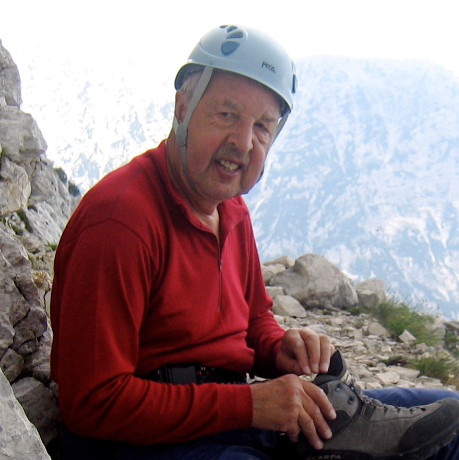 His contribution to Mountaineering Scotland was in access and conservation, both as secretary of the Access and Conservation Committee for 14 years (1996-2008) and in advising and inspecting path-work through the British Upland Footpath Trust (BUFT).

He inspected and provided reports (with photographs) on paths in Wales, England and Scotland and his advice on path-work was sought after by a variety of public bodies. During his tenure of the post of secretary, the Scottish Access legislation was passed. He was actively involved in the consultations, meetings and lobbying, leading to the passage of the act of parliament.

Honorary membership was awarded in 2007 in recognition of Mike’s work.