Irvine Butterfield’s name is synonymous with the Scottish mountains because of his book ‘The High Mountains of Britain and Ireland’ and ‘The Magic of the Munros’, which gained a reputation as ‘The Bible’ for hill walkers. However these were predated by his support of the Mountaineering Council, which spanned some 38 years and began in the Council’s embryonic stages.

His association started through his working with Sandy Cousins (SMC) when the Association of Scottish Climbing Clubs broke away from the BMC and formed its own representative body – the Mountaineering Council of Scotland. Irvine (secretary of the Mountain Bothies Association at the time) felt there was a need for a body that represented individual hill walkers as well as Scottish Clubs and he became an early Individual Member of the newly born MCofS. 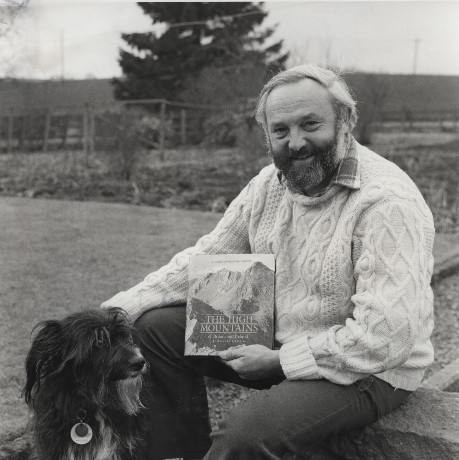 From early days he was only too pleased to volunteer to spend days stuffing hundreds of MCofS magazines into envelopes for posting to members. He was instrumental in gaining our first dedicated headquarters in Perth, at a rental we could afford. Irvine continued to help out in the office as a volunteer on a weekly basis. Nothing was too much trouble for him from taking calls, stuffing envelopes to writing letters. He also volunteered numerous slide shows in aid of raising funds for the MCofS.

He started submitting articles on a regular basis for the then newly developing Scottish Mountaineer magazine, never wanting payment. Early issues saw use of many of his expansive library photos.

Irvine continued to help out in the office when called upon, and we saw him regularly for banter and ideas, and it’s impossible to put a figure on his support for the magazine which remained a high priority for him and added greatly to the quality.

He latterly volunteered to be on the Member Services Committee.

- Irvine was one of the founding members and lifelong president of the Crochallan Mountaineering club.

- He was a founder member of the MCofS in 1970 and worked behind the scenes as a volunteer.

- He has helped MCofS in negotiations with other bodies in developing initiatives including bunkhouses, walking festivals, Scottish Tourist Board etc.

- He gathered bunkhouse accommodation information for use in the MCofS and kept it up to date.

- He wrote an Information Sheet on Hills (Munros and Corbetts) for sale by MCofS and now available as a definitive Munro resource on the website.

- He worked with MCofS and Harvey Maps (as a volunteer) on the Scottish maps of the new British Mountain Map Series.

- He was involved in the setting-up of the association and was a volunteer for many years.

- He undertook a period of office as Secretary.

- Irvine undertook research of all possible ‘shelters’ across Scotland for the MBA which formed the basis of future development.

- Irvine was a founding member of the SWLG and was chairman for some years.

- Irvine was one of the first members of the Friends, latterly being granted honorary membership.

- He was a founder member of the JMT.

- He undertook a period of office as Director on the Board of JMT.

- He was involved in the JMT Award for young people.

Perthshire Alliance for the Real Cairngorms

- He was a volunteer on the Alliance from the start and was instrumental in supplying information in support of the local communities such as Blair Atholl with whom he had a close association.

- He wrote about the ideas of the expanded Cairngorms NP.

- He organised local events in Blair Atholl to highlight the alliance (e.g. collection of photography of the cairngorms and art display).

- His local contacts in the Council and with local MSP’s helped this cause immensely.

- Irvine was elected as the first president of the society.

The Year of the Mountains

- Irvine sat as a volunteer on the steering committee that organised celebrations of the International Year of the Mountains.

- He organised numerous events for the celebration year.

- Irvine worked for Customs and Excise dealing with the Whisky industry in Scotland from 1960 till he retired.

·         The Magic of the Munros (1999) - a large format picture book with historical narrative nominated for the British Illustrated Book of the Year Award 1999.

- Irvine was a member of the Outdoor Writers Guild (OWG) for many years.

- He was awarded the OWG’s prestigious Golden Eagle Award (2000).