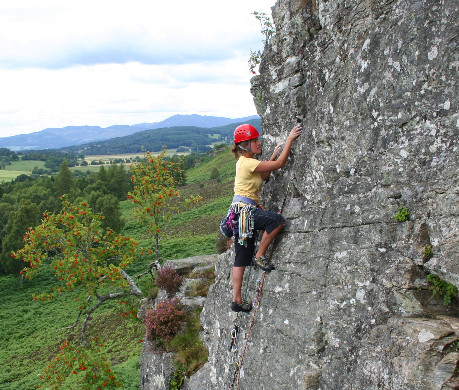 Picking your way up a seemingly impregnable rock face and getting to the top safely is a real buzz. The brain is working, the adrenaline is going and you’re getting a full body workout, with a real confidence boost and a great sense of satisfaction at the end.

But the main priority is safety, and getting started in rock climbing is not something you want to be doing on your own.

There are several ways you can get started.

There are also different styles of rock climbing to think about.

Traditional climbing is probably still the predominant style in Scotland. It involves the use of ropes and ‘gear’ which is placed in cracks and fissures in the rock to provide protection as you climb. The range of climbing venues includes mountain cliffs, sea cliffs, and smaller outcrops, which can be easily accessible near towns or might include some of the remotest crags in the UK.

Bouldering involves climbing short crags (usually no more than about 8 metres high) or large boulders. There’s no need for ropes or climbing gear other than a pair of rock shoes, a chalk bag and a bouldering mat. This is probably the fastest growing discipline in climbing, with thousands of bouldering problems detailed all around Scotland.

Sport climbing is similar to traditional climbing in many respects, but the protection is already placed in the rock, in the form of fixed bolts, which you clip the rope into as you ascend, using extenders (or quickdraws). Most sport climbing venues are low-lying and easily accessible, and tend to be one pitch in length.

Moving from indoors to out

If you already have some skills gained on indoor climbing walls you have a head start for learning terad climbing outdoors - but it still helps to have so0me advice and guidance.

We run Real Rock courses for under 18s and Ready to Rock for over 18s just to help you make that step from indoors to out.

Read more about Ready to Rock

Most coaching for climbing, and training for coaches, is carried out on indoor climbing walls.

For information about coaching opportunities, see our Skills & Coaching section or, for younger climbers, the ClimbScotland website.

For more information on where you can find the different styles of climbing, check our Where to go page.

For advice and information about the use of bolts for developing sport climbs in Scotland see Mountaineering & Climbing Ethics.

Our new website ClimbScotland has a wealth of information on starting and progressing in outdoor climbing.

As with hill walking and mountaineering, success on a rock climb starts well before you touch the rock. Here Glenmore Lodge instructor Derek Bain runs through the preparations for a successful rock climbing trip.

Starting out in trad climbing

These videos from Glenmore Lodge give good advice on some of the basics of trad rock climbing.

1. How to trad climb

It is important to remember that rock climbing outdoors is an adventure, and one where the outcome is not always assured, so anyone considering taking it up should first read the Mountaineering Scotland position statement:

Understanding that, however, there can be huge mental and physical health benefits from climbing and immense satisfaction from the sense of achievement and the promotion of self-reliance.