The approach of Mountaineering Scotland to proposed wind farm developments is based on a detailed assessment of each individual proposal taking into account a number of factors. 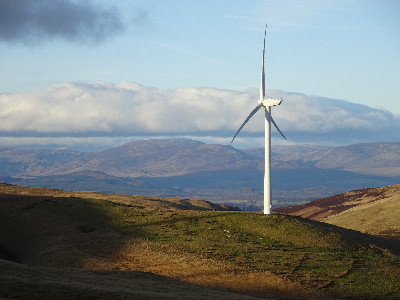 Mountaineering Scotland will only consider objecting if a proposal is sited in or near an area of mountaineering interest.

Most wind farms are proposed for areas with no or little mountaineering interest.  Areas of mountaineering interest are not rigidly defined but include Munros, Corbetts and other hills with a national or substantial regional reputation.  Most Munros and Corbetts are included with the areas of Wild Land recognized in Scottish Planning Policy 2014, but not all mountains are included within Wild Land and not all Wild Land is of mountaineering interest.  The direction of view also matters:  a wind farm in a view to low settled ground or aligned with another wind farm is less visually disruptive than one interrupting hill-to-hill views or views into areas of wild character.

Scotland’s complex topography and northern latitude precludes a simple definition of ‘mountain areas’.  Mountain tops and slopes cannot be divorced from the glens or coastline at their foot.  Wild land at sea level can give a mountaineering experience in places such as northwest Sutherland.  Climbing crags and bouldering venues can be found at all heights and in all areas of Scotland, from sea cliffs to Ben Nevis.

Less than 1% of Scotland lies above 900m, only 15% above 450m, and 32% above 300m.  Coincidentally, 31% of Scotland lies within National Parks, National Scenic Areas and Wild Land Areas combined.  In broad terms, it appears reasonable to suggest that there is mountaineering interest in around half of Scotland’s land because of its height, relative wildness or climbing resource.

Proximity to areas of mountaineering interest

This is not a rigid measure since it depends on topography and other factors.  As a rule of thumb, it is unlikely that a proposed development >25km away from an area of interest is going to significantly degrade the mountaineering experience.

Wind turbines can be visible over very substantial distances (50km or more) depending on light and weather conditions at a particular time.  However, only rarely do developments >25km away draw attention to themselves:  more usually it is a case of knowing where to look to see them.  The likelihood of impact also relates to the mountaineering activity undertaken in an area.  Hillwalking and ski-touring, where experiencing the wider landscape is a primary motivation, are more vulnerable to visual intrusion than climbing or bouldering which often take place in more contained locations.

A ridge-line or hill-top development is visible over a wider area than one on a hill-slope or lower moorland.

Open landscapes and exposed hill-tops and ridges are attractive wind farm locations since they maximize the wind resource.  Such siting, however, also maximizes the area experiencing visual impact from the development.  A compact development may have less impact than a linear development following ridges.  Linear developments can also involve a greater distance of gravel roads.  Siting and scale interact.

Both the number of turbines and their height influence the impact of a proposed development.

The height of turbines has been steadily increasing and proposals are now typically for blade-tip heights over 120m, with 150m not unknown - three to four times the height of early developments.  This increases their visibility but it also has an important psychological effect:  Scottish mountains may appear high but their grandeur is often a function of their wild landscape setting rather than of absolute height. Large turbines diminish the relative scale of the mountains and as a consequence overwhelm the landscape.

Wind farms require access roads for heavy equipment. These can stretch for miles, are wide and scar the landscape. They are highly intrusive and add to the impression of industrialisation.

Wind farm access roads are usually a lesser consideration than the turbines themselves because, being at ground level, they do not have the same visual impact at a distance.  However, they are a consideration and especially so where a long gravel road is needed just to reach a proposed wind farm site or the road requires to be heavily engineered to maintain acceptable gradients.

The first development in an area can be particularly harmful, both through its direct impact and through a honey-pot effect that attracts other developers to the area and the likelihood of extensions being sought.

Cumulative impact can lead to an area being dominated by wind farms such that they are in sight in all directions from a summit.  This would generally increase the likelihood of an objection.  However, where wind turbines have become the dominant characteristic of a landscape Mountaineering Scotland may be less likely to object to further turbines within the affected landscape.  As a principle Mountaineering Scotland would prefer to see large numbers of turbines in a small number of locations since this minimises total visual impact across the country.  However, the planning system considers most development applications individually so the de facto formation of wind farm concentrations in some areas through clustering of applications (e.g. northwestern Monadhliath) has no effect on the number of other applications coming forward.

Sequential impact means an individual would repeatedly encounter wind farms along a chosen hill route or may have no choice of hills in an area that is not bracketed by wind farms.

Mountaineering Scotland judges every proposal solely on its landscape merits.

If there is a case for objection based on the impact on mountaineering interests, then only in a very marginal case might community ownership tip the balance towards not objecting.  We recognise that small turbine clusters in less sensitive areas can benefit communities where they have direct ownership.

Mountaineering Scotland believes that the short-lived redistribution through ‘community benefit’ of a small portion of the distorted market price received by developers and landowners undermines the long-term vitality of a sustainable local economy, not least by the local reduction of mountaineering tourism.

All objections to development proposals made by Mountaineering Scotland are on our website.

Decisions on whether to object are made by Mountaineering Scotland staff and volunteer Directors.  At least five people have been principally involved over the past 5-6 years and some inconsistency is inevitable.  Not all past objections would now be made, though most would, and some were not made because of limited resources.  The context in which Mountaineering Scotland decisions are made has also changed as developers have become more aggressive in their search for profitable sites regardless of potential impact upon the mountain landscape.

Since our foundation as the Mountaineering Council of Scotland over 40 years ago, Mountaineering Scotland has been representing the views and needs of hill walkers, mountaineers, climbers and snowsports tourers. We work closely with our members, the media, partner organisations, the government and landowners to make a real difference on the matters that affect us all.

By becoming a member of Mountaineering Scotland, you are supporting this work and adding your voice to that of 14,000 other members by getting involved in our campaigns to protect access rights and encourage sustainable mountain environments.