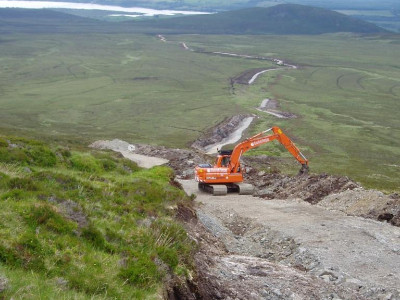 Footpaths made by man have given access to remote areas for millennia. In the past they were small scale and had minimal impacts on the surrounding environment and landscape

Availability of mechanised earth moving equipment has facilitated the construction of tracks that are relatively wide, sometimes long, and often damaging to the overall landscape.

While welcoming the Scottish Government’s current moves to bring tracks into the planning system, its new measures are too weak and fail to ensure democratic oversight. Local authority staff are under immense pressure and need adequate time to evaluate all proposals. A default position in which notifications not responded to within 28 days can proceed is unacceptable.   All hill tracks should require planning permission.

Government and local planners must guarantee that certain factors are taken into account when approving the building of new hill tracks:

Since our foundation as the Mountaineering Council of Scotland over 40 years ago, Mountaineering Scotland has been representing the views and needs of hill walkers, mountaineers, climbers and snowsports tourers. We work closely with our members, the media, partner organisations, the government and landowners to make a real difference on the matters that affect us all.

By becoming a member of Mountaineering Scotland, you are supporting this work and adding your voice to that of 14,000 other members by getting involved in our campaigns to protect access rights and encourage sustainable mountain environments.