There are few poisonous plants in Scotland which the walker or climber should avoid touching. Nettles, of course, which everyone knows from childhood, can give a sting and temporary rash, and giant hogweed, which is not normally found in upland areas.
However, there is one extremely common plant which does give rise to a possible hazard that walkers and climbers should be aware of: bracken.

Bracken is common over all the lower slopes of the Scottish highlands and elsewhere in the hill areas of the UK. It is believed to be increasing its coverage in some areas by about 3% per annum. A number of studies have shown that ingestion of bracken by live-stock leads to cancerous tumours, and the spores of bracken contain chemicals which are known to induce cancers in humans.

It is believed that a danger to humans arises from inhaling large quantities of spores, which are at best a major irritant and at worst may be cancer producing agents. Water supplies may become contaminated by toxins leaching from bracken beds.

The concentration of chemicals (and the spores in the water supply) is likely to be higher in conditions of drought. 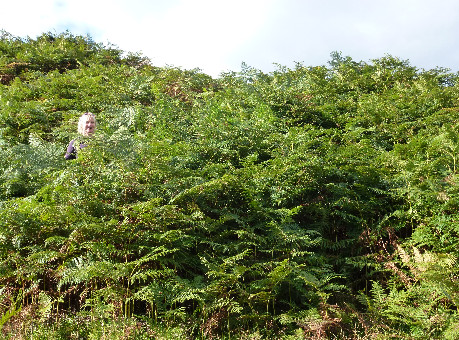 The spores are released into the air by the plant during late August and September. Fine sunny summers with short rainy spells usually induce greater quantities. Higher quantities of spores are produced on average once in every four years.

What you can do