Insects: the midges and their friends

There are several types of biting insects found in Scotland. None carry disease but they can pose a severe threat to your enjoyment of the outdoors and one species in peculiar has become very closely associated with summer walking and climbing in Scotland - the midge.
They're not alone, though: a warm summer can bring out the cleg, or horsefly, and in certain areas birch flies can also be a problem.

These tiny flies are to be found across the whole of Scotland. They are probably most noticeable in the north and west, although recent years have seen eastern ranges just as badly affected. Studies of the midge (Culicoides impuctatus) show that up to 40,000 can land on an unprotected arm in one hour with a potential 11 bites per second.

Research has indicated that the nature of human sweat could be a critical factor in attracting midges. It appears that vegetarians and pregnant and breastfeeding mothers could be at greater risk of being bitten and that odours in exhaled breath may attract them. 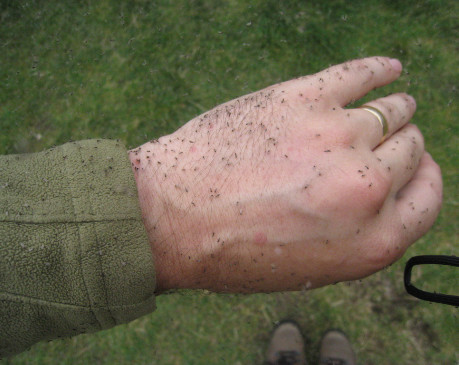 No-one gets attacked by 'a' midge - they come mob handed

Midge antennae are sensitive to the breakdown products of chewing plants and to fermentation odours from lactic acid bacteria.

However, biting insects are attracted by carbon dioxide which is exhaled. Based on this fact, the company, Calor Gas, has recently come up with a partial solution to the midge menace at least around cafes, campsites and hotels. Their gas powered bug killer attracts midges to it by issuing carbon dioxide and sucks them into a collection chamber where they are killed.

And it seems to work!

How do you avoid them?

Midges do not like excessive sun and are too small to fly during winds of more than about force 2. On calm, cloudy days they will search out the stationary walker, camper and climber, and make life a misery. Days of fine rain also attract large numbers of the insects but they hide in grass and other foliage during heavy rain. They are most active in the mornings and evenings in calm winds.

The numbers of flies and the periods of the year they are most prevalent depend to some extent on the ferocity and length of the winter season, which can kill off the eggs. When it has been cold, with snow or frost regularly down to sea-level throughout the winter and into April, Midges are not likely to be found to be a nuisance until later in June through to September. If the winter has been mild and wet, with warm or wet conditions in March and April, they can become problematic early in May. 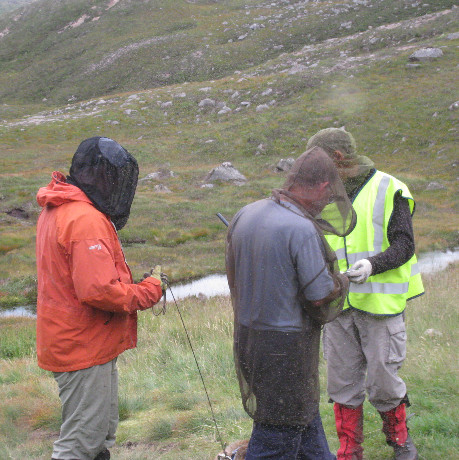 They're neither fashionable nor elegant, but midge nets do the job

It is recommended that tents have full, effective, fly-proof nets (midge-proofing requires a very small mesh size). Bivouacking and camping can be unpleasant in July and August because of the midge, and the use of private bunkhouses, bothies, bed & breakfast or hotel accommodation is a more amenable option.

Once outside your tent or accommodation, midges can be a major problem especially if you are staying in the same place for any time. Midge nets which cover the head can obscure your vision a bit, and don't look very dashing, but they can save your sanity. You can also get net jackets to provide even more protection. (The photo here was taken during a bothy work party, hence the hi-vis waistcoat -  but it provides no protection against midges!)

The final defence is to use an insect repellent but there are pros and cons, which are discussed below.

Concentrated in the northern highlands, these relatively large insects have a vicious bite. You will only feel the bite as the fly disengages to fly off, by which time it is too late. They do not swarm in large numbers and thankfully are relatively uncommon. They are most active in the summer months from June to September.

The majority of people react to the bite with a large red weal, which is exceptionally itchy. The itch can continue for many days afterwards, and up to two weeks.

You should not scratch the site of the bite. Antihistamine creams applied to the bite area help take the pain away and stop the itching.

These flies belong to the genus Simulium, a part of the black fly family and, like the smaller midges, the females require a blood meal in order to reproduce. Most of these blood-sucking insects attack livestock but, according to entomologists, several species are known to bite humans. The predominant species on Speyside is Simulium reptans.

The worst affected areas appear to be localised, being confined to woodland around Loch Insh near Kincraig and along Speyside around Aviemore.

The birch fly appears when birch trees start to leaf in May and black swarms of them congregate in shady areas under the trees, normally in the morning and particularly near running water where they breed.

The bite of the birch fly is extremely unpleasant and can cause extremely irritant sores, much worse than mosquito bites. The usual insect repellents do not seem to work. Locals are aware of the problem and resist picnicking or fishing under birch trees for a couple weeks in that area. Warm and very wet weather early in the spring provides ideal breeding conditions leading to a surge in the population of birch flies. Local businesses often place posters warning tourists of the danger. So taking an interest in the weather and reading notices may be prudent if you’re staying down in the woods!

There is a range of chemical repellents on the market that help to prevent these insects biting. These repellents do not stop the midge swarming around humans although they do discourage it from landing on the skin and prevent biting. Midges are attracted to animals by detecting the carbon dioxide expired in exhaled breath, so there is not a lot we can do to go undetected.

The active ingredient in most of these repellents is DEET (diethyltoluamide), which is also carcinogenic. To be fully effective requires the lotion to be about 90% proof.

Safe use of insect repellents

Insect repellents containing DEET or Permethrin are both reasonably effective against midges and ticks, but there have been some serious adverse reactions associated with DEET, particularly towards children.

In lotions containing under 50% DEET these reactions are restricted to transient and quickly disappearing effects to the skin in most people. The occasional extreme reaction has been recorded as acute dermatitis leading to permanent scarring. There is also one reported case of anaphylactic shock, although this is extremely rare, and there have been very occasional deaths associated with DEET in adults. Certainly ingestion by mouth when the repellent is sprayed onto the face can be dangerous when concentrations are greater than 50%. Children, however, are much more susceptible to toxic side effects and reported problems include neurological and cardiovascular toxicity, dermatitis, allergic reactions and death. These reactions occurred in repellents containing concentrations less than 20%.

Permethrin seems to have very few side effects and also appears to be a more effective repellent against ticks. It is also effective for longer, particularly when applied to clothing.

What you can do: