Camping in a number of mainly lochside locations in the Loch Lomond & The Trossachs National Park is now controlled by byelaws.

The Scottish Outdoor Access Code states that access rights extend to wild camping, which “is lightweight, done in small numbers and only for two or three nights in any one place. You can camp in this way wherever access rights apply”. The code advises that you should leave no trace.

However, Loch Lomond and the Trossachs National Park Authority has introduced new camping management byelaws from 1 March 2017, with a review being undertaken after the first three years. The byelaws will apply each year from 1 March to 30 September and supersede the previous byelaws which applied to East Loch Lomond.

The new camping restrictions apply even if you are behaving responsibly and in accordance with the Scottish Outdoor Access Code. They apply not only to tents but to other forms of shelter and include restrictions about where you can sleep overnight in vehicles.

What you need to know

The byelaws apply in ‘camping management zones’ (shown on the map here) where it will be a criminal offence to camp without a permit, collect wood and light a fire ‘irresponsibly’ in a non-designated area, or sleep overnight in a vehicle - except where it is on a road or verge, which is covered by roads legislation rather than the byelaws.

The park authority has designated 'Your Park' informal campsites within the camping management zones where you will be able to camp, having purchased a permit in advance (subject to availability).

This provision includes bookable pitches, parking and basic facilities. Campsites at Loch Chon and The Cabin at Loch Lubnaig will cost Ł7 per adult per night with under 16s going free; otherwise permits will cost Ł3 per tent/motorhome per night. 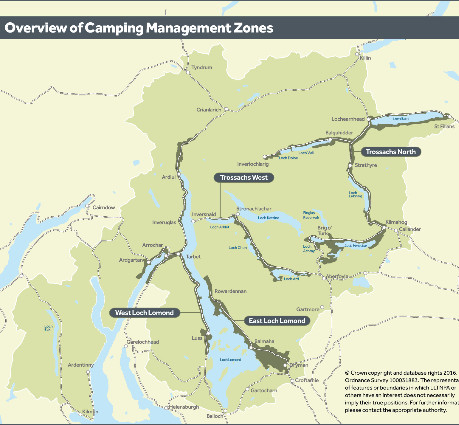 Apply for a permit here

The Park Authority intends that the start and end of camping management zones will be signposted, but it’s possible that some intending campers may not be aware they are inside a zone when they are arriving at loch shores from a variety of directions.

It is also the case that walkers, cyclists or canoeists may find themselves wanting to camp within the byelaw zones for reasons of safety – for example needing to stop their activity due to illness, exhaustion or nightfall, or in the case of water-borne access, being driven by a strong wind away from a planned camping area. The Park Authority has said that where there are clearly mitigating circumstances, and/or a permit or group exemption has already been obtained for the original planned camping location, this will not be considered a breach of the byelaws.

The Park Authority has published a list of common Q&As and has stated: "National Park Rangers will always offer advice on how to camp responsibly. Taking any formal action will always be a last resort."

While Mountaineering Scotland objected to the introduction of the byelaws and permits, we advise you not to defy the camping ban due to the potentially serious legal consequences.

If anyone believed to be breaching the park byelaws is approached by a Park Ranger or police officer, they may be asked to provide their full name, date and place of birth, address and the registration of any vehicle. Failing to provide these details is a breach of the park byelaws and constitutes a criminal offence. A Park Ranger or police officer may also require someone to leave the management zone. Failure to do that is also a breach of the park byelaws and a criminal offence. A ranger or officer may decide to issue a warning or may choose to report the matter to the procurator fiscal who will decide whether to bring a criminal prosecution.

The maximum fine for breach of the byelaws is Ł500, which can only be imposed by a Sheriff Court following a conviction and would result in a criminal record which could affect your work and travel prospects. There is no fixed penalty notice option in place.

Reports from last year of a person who had proceedings against him dropped after refusing to enter a plea in court should not be taken as normal procedure. Refusing to enter a plea could lead to a charge of contempt of court, punishable by a separate fine or even imprisonment. Anyone charged with a criminal offence should take independent legal advice.

It is important to note that camping access rights apply to non-motorised access and do not include activities based on the use of a vehicle, such as campervans, caravans or motorhomes, or sleeping in your car.

The park authority has provided just 20 loch-shore spaces within the camping management zones for campervans and motorhomes to stay with a permit. There are also formal campsites throughout the national park. The byelaws make it an offence to sleep in a vehicle in a camping management zone without a permit, unless the vehicle is on a road (i.e. in a layby), as defined by the Roads (Scotland) Act 1984. The byelaws do not apply to laybys controlled by Transport Scotland on trunk roads within the camping management zones. Under the byelaws people with campervans and motorhomes can use laybys to stop and rest, including sleeping overnight if necessary, but permanent encampment on a road (including laybys) is an offence under road traffic legislation.

Further information can be found in the Park Authority's Camping & Motorhome Q&As. 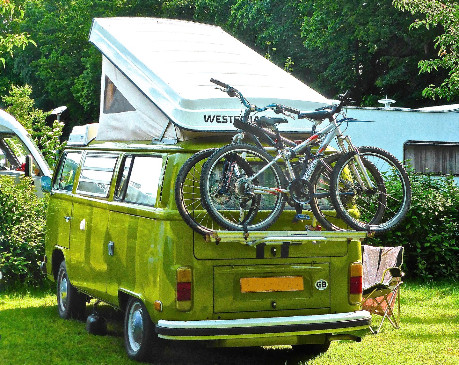 The park authority have published a list of common Q&As, as well as Camping and Motorhome Q&As and Angling Q&As, but if you have any further questions, please contact the park authority access staff who are best placed to advise you on the operation of camping management zones and how to apply for permits.  Queries can be made by email to yourpark@lochlomond-trossachs.org or by phone to 01389 722600.

Let us know your experiences

If you find you are inadvertently camping in a camping management zone without a permit, we advise you to follow instructions from the rangers and then to let us know about the incident. We are gathering information from campers about the implementation of the byelaws and are interested to learn about all experiences, including use of the online permit booking system.

You can learn more about the practicalities of wild camping in the Hillwalking section of our website.

Whether camping within or beyond the camping management zones we have a duty to camp responsibly, and advice can be found in the Scottish Outdoor Access Code.

More information can be found in a leaflet produced by Scottish Natural Heritage on how to camp responsibly. 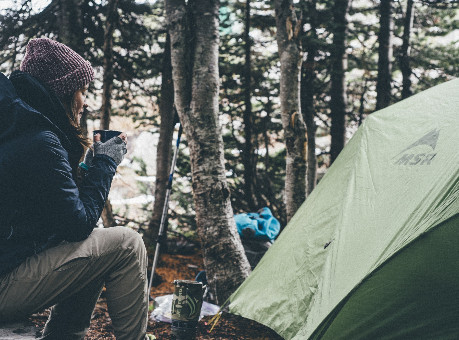