Mountaineering Scotland has quantified the impact wind farms located in mountain landscapes have on hill-walking behaviour for the first time. In a survey of members, over two thirds (67%) stated that they prefer not to see wind farms when in the mountains and 22% said that they avoided areas with wind farms when planning their activities.

Mountaineering Scotland has published a report into the impact wind farms have on the behaviour of mountaineers and hill walkers as part of the evidence base the organisation uses when opposing the small number of wind farm planning applications that it believes would cause irreparable damage to Scottish mountain landscapes if allowed to go ahead.

Over 1400 Mountaineering Scotland members, mostly hill-walkers, responded to a survey which sought their views on a range of subjects, including the organisation’s policy on protecting mountain landscapes from insensitive developments. The 23% of members who avoid areas with wind farms or go less often compares with just 2% who said they were encouraged to visit the mountains more often because of wind farms.

Mountaineering Scotland Chief Executive, David Gibson said “This survey gives us some important evidence about the real impact wind farms in inappropriate mountain locations can have on the behaviour of hill walkers and potentially other mountain users – but the impact goes more widely than this. If hill walkers avoid visiting areas affected by wind development then local communities will lose the money hill walking visitors bring to shops, places to stay and other visitor-related businesses. A 20% reduction in hill walkers could easily make the difference between profit and loss for small enterprises in mountain areas across Scotland.”

David continues, “Hill-walkers are likely to be particularly sensitive consumers of landscape. They are therefore a barometer in terms of identifying wider tourism impacts from wind farms. Mountain recreation is a significant tourism market in Scotland. Walking tourism was estimated to bring in Ł627m to the Scottish economy in 2008 – more than all other nature-based tourism combined – and 15% of all tourism spend.”

This is the only survey which has ever asked Scottish hill walkers and mountaineers how wind farms impact on their current mountaineering activities. In a previous survey in 2013-14, 56% of members anticipated avoiding areas with wind farms in the future.

That only 23% have actually changed their behaviour in this way by 2016 is testament to the success of campaigners like Mountaineering Scotland. In the last two years some major and potentially damaging wind farm proposals have failed to gain planning approval, in many cases due to concerns about their detrimental impact on wild land. However it is also because the roll-out of consented wind farms has been very slow and many projects have not yet been constructed.

David continues “With more wind farms consented and due to be built and new applications for industrial-scale developments coming in all the time, we must not be complacent. Scotland’s cherished mountain landscapes and wild land are at risk of being significantly diminished over time and this could have a major negative impact on local communities that rely on their visitor and tourist economy. How much future displacement there is will depend upon how well Scotland’s mountains are protected by the planning system and Scottish Ministers.”

Mountaineering Scotland presented its new report to a public local inquiry this week into the proposed Whitelaw Brae wind farm in the Tweedsmuir Hills where 2020 Renewables wants to build a wind farm beside the largest area of high ground in southeast Scotland. West of the Tweed is a massive spread of turbines, none of which were objected to by Mountaineering Scotland, but the organisation regards the landscape east of the Tweed as an important area of high ground that should be valued. 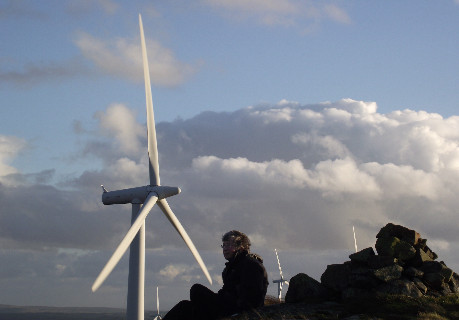