Responsible mountaineers have called for action to be taken against the growth of ‘dirty camping’, which sees irresponsible campers leaving rubbish, fire damage and even whole campsites in their wake.

Mountaineering Scotland is calling for a multi-agency approach to work with communities on local management solutions, along with a public information campaign to educate people about their responsibilities as well as their rights.

In a summer which has seen the problem of dirty camping becoming increasingly common in rural hotspots across the country, Mountaineering Scotland’s Access & Conservation Officer Davie Black said: “Antisocial camping can and should be dealt with. Hotspots for dirty camping are usually known to local authorities.

“We call for all those who are concerned about this to come up with local management plans that identify the problem and its causes, and identify the resources needed to tackle it.

“There is already legislation covering anti-social activity. What we need is coordination of resources to enforce it.”

Roadside camping is where the problem is worst, where people pitch camp close to where their car is parked, and leave behind plastic and glass, burnt ground and even camping kit and human waste.

It’s a problem that angers local people who live and work in affected areas, other visitors to the areas, and responsible hill-goers and campers everywhere.

Davie Black said: “It is easy to associate all informal camping with rubbish and pollution, but the truth is different. Walkers and climbers going into the hills – wild camping – tend to leave little trace of where they have been. Roadside campers who leave no trace are also ‘invisible’. But the trail of dirty roadside camping is only too visible and is what gives all campers a bad reputation.”

Wild camping is usually done well away from roads and buildings, is lightweight, done in small numbers and only for two or three nights in any one place. Roadside camping is not usually considered wild camping, although it does take place and is lawful if done responsibly.

Stuart Younie, Chief Executive Officer of Mountaineering Scotland, said: “We have seen a lot of camping this summer and it’s great to see people getting out to enjoy Scotland’s stunning scenery and the outdoor lifestyle, with all the health benefits it brings. But the downside has been the number of campers ruining beauty spots for other visitors and those who live there.

“We have enlightened legislation that allows people the freedom to camp and at the same time provides for tackling anti-social behaviour where it is required – although we acknowledge that the police and local authorities don’t have the resources to monitor every hill and glen.

“Mountaineering Scotland does what it can to promote responsible behaviour. We think greater emphasis should be placed on government agencies, councils and national organisations working together with communities to develop local management solutions. We know where the pressure spots are.”

And he added: “Almost 15 years on from the publication of the Scottish Outdoor Access Code we think it’s also time to consider a public information campaign to remind people about their rights and responsibilities, including the impact that irresponsible camping has on local people and the environment.”

Mountaineering Scotland provides advice on minimising your impact when in the mountains.

Through its Tak It Hame campaign Mountaineering Scotland also urges everyone who loves walking and climbing in the hills to avoid littering and to pick up any litter they find.

By becoming a member of Mountaineering Scotland, you are supporting this work and adding your voice to that of 14,000 other members by getting involved in our campaigns. Our membership package includes insurance, discounts, quarterly magazine, subsidised mountain skills training and more. 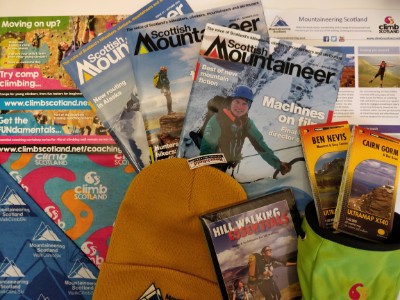