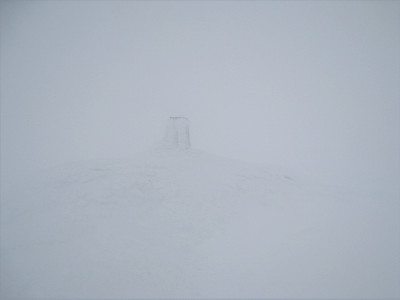 Sometimes you’re doing everything properly but still get caught out.

Or is that really true?

When I checked the forecast at lunchtime on the first Friday in May it wasn’t promising very much for the weekend – and even less when I checked again in the late afternoon.

So when I woke in Bob Scott’s Bothy on Saturday morning I decided to just take a wander out to Corrour Bothy, clear up any rubbish that needed clearing, and see what the weather looked like from there.

Well the weather was great all the way out there and, even if there was heaps more snow on the hills than you’d expect for May, at least it was likely to be soft on the surface. So why not nip up Ben Macdui by the side of the Tailors’ Burn and go over to the Hutchie Hut and back down Glen Derry?

It was one of those good ideas at the time that, for some reason, survived the arrival of cloud on the tops while I had brunch in the bothy.

About 11-ish I crossed the bridge and set off northwards, slanting up the Tailor’s Burn path, soon hitting wet snow and pushing on upward to where the snow was deeper and firmer, though still soft enough to take a boot-depth. (My forecast about the snow was good, at least: even at its hardest, I never came across anything I couldn’t kick a step in.)

An unusually large and long cornice was blocking the ascent from the stream up onto the ridge connecting Carn a Mhaim with Macdui, so I moved over to the northern bounding ridge of Coire Clach nan Taillear, which has the advantage of debouching onto the plateau almost at the summit.

As I approached the summit I entered broken cloud and was struggling more with a fierce and bitingly cold wind, so I did the right thing and took the map and compass out. I wasn’t worried about being able to reach the top, but set the compass to a bearing from the summit towards the unnamed top at the cliffs above Lochan Uaine. I’d probably just have to follow the highway of footprints, but I was being responsible: making sure I’d set off in the right direction when I left the top.

And then I was on the summit plateau. And snow. Considerably more snow than I’d ever imagined at this time of year. And thicker cloud too. All I had to do to reach the summit was keep walking forward but, after a bit, I was beginning to have my doubts, and when it finally ghosted out of the white it was a pale shadow just five metres away. The view indicator, which I came on first, was like a plaque set into the surface of the snow (normally it stands at over a metre high) and the massive summit cairn itself was almost completely buried, with only the trig point showing.

Between the wind and the lack of views, I didn’t even pause but took the preset compass from my pocket and lined up a bearing… …on nothing.

Normally you can take a sighting on a rock, even close by, or, if there are no rocks showing through the snow, on a patch of older or different textured snow. But this snow was all freshly fallen and the same blank white as the sky. I could see my feet, I could see the disturbed snow around them; beyond that I could see nothing at all. Just blankness.

I suppose that’s really where I made the sort of rookie mistake you still make when you’re only in your fifth decade of hill climbing. Instead of reversing my steps then, before they were blown over, and descending by the route I’d come up, I strode forth on my bearing, confident that before long I’d come below the cloud or within sight of something to take a bearing on.

And I walked. And I walked. No rocks, no clearing of the cloud, just more blankness. Or the same blankness. Absent of any visual clues I just kept going on the compass. I caught myself veering in towards the wind several times and corrected every time it happened, but I knew I was drifting to the right. I’d missed the old Sappers’ Bothy – seeing it is a good sign you’re on the right route – though whether I’d missed it by a few feet or much more I had no way of knowing.

It was a curiously detached feeling, walking through this blankness – until suddenly I became very much attached. One foot broke through the crust of snow and went into a hole. And when I tried to lift myself out the foot wouldn’t budge.

I sat in the snow for several long moments, pulling at my foot one way and then another, before finally easing it out from the invisible jaws of rock deep in the snowpack. What an embarrassing way to go that would have been!

My walk through limbo continued: battered by wind, a casing of snow and ice building up on my gloves and grabbing onto any slight crease in my outer layer, just like it was still the middle of winter. I was waiting for the slight rise before the top of the cliffs, but peering intently into the white all the time, anxious to get some sight of anything which might give me a clue to where I was. In fact anything at all.

That’s how I saw the two ptarmigan, one behind the other, walking downwind across the front of me. I stopped to watch them, seeing the snow blowing past them as they walked. They’d walked a good bit before I twigged that I wasn’t having to turn my head to keep them in sight. Nor were they getting any further away from me. So I looked with a new head and saw I’d been staring at a patch of old, hard snow showing through the fresh: nothing like ptarmigan or any other bird, and just a few feet from me.

Nice that I was so fooled as to stop though. As I managed to focus on the no longer ptarmigan-shaped snow patch I also became aware of the faintest of shade changes slightly to the right: a pale diagonal streak of white on white. It had to be the cornice.

I stared longer, trying to orientate myself to the line it formed, and checked the compass again. Best bet was that I’d drifted further to the right than I’d thought and was on the slope above Sron Riach, just where the cliffs start descending. That would explain the lack of any upward turn, although I’d reached the cliffs sooner than I’d have expected.

I checked what the bearing should be from the map and it married with the direction of the cliff I got with the compass on the ground, so started downhill, paralleling the cornice, keeping as far away as I could without losing sight of it, for visibility was desperately low and cornices there can be big.

And that was it: an ending without drama. After a bit I started to see rocks through the snow and by the time I reached the slight re-ascent to the rocky outcrop on the descent path, I spotted it from at least 20 or 30 yards.

It had been exciting for a while though: my most adventurous day of the whole winter – in May.

But need it have been exciting? There’s no getting away from the fact that I had a lucky escape from almost certain death had I gone over that cornice, but was it my skills which saved me or was it luck? I’d navigated in a white-out before, I was using my map and compass, so surely I’d done the right thing?

Well no. And, as is common with mountain accidents, I made not just one mistake but a whole series, each building on the last.

First point: I’d done the right thing by checking the forecast, but the wrong thing in choosing to ignore it when the morning turned out fairer than expected: I could even see that cloud was coming down over the tops.

Second: When I hit the cloud just below the summit, that was a chance to turn and come down. It would have meant a longer walk back, but would have avoided having to walk blind. I made the mistake of assuming it was only the top few feet of the mountain that was cloud-covered without thinking it through: the wind was on my back as I climbed, blowing the cloud up the hillside… and down the other side, so that it extended far lower down the hill on the lee slopes.

Third: Again making the assumption that I would be descending into clear air very soon, I chose a route that aimed directly at a cliff-top which was certain to be corniced. It would have been hard to have picked a more dangerous target.

Fourth: Having made that bad choice, I compounded it by marching off on the bearing without taking note of the time or counting my steps. Where I should have been measuring distance by time or number of paces, I was depending entirely on coming below the cloud and gaining a visual fix – and that didn’t happen.

Fifth: The whole escapade also underlined that if you’re on your own you should go to some lengths to avoid having to travel in white-out conditions. I could have avoided this by turning back before embarking on the long leg between the summit cairn and the top of Sron Riach.