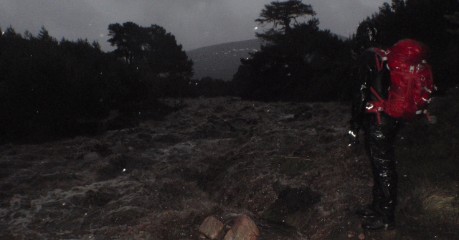 Weather forecasts: yep, check them and plan your adventures accordingly. So that’s what we did. Super high winds were forecast (100mph). Precipitation: ‘Mainly dry, risk of odd shower. Overnight extensive snow developing, later rain’. It must also be noted that a named storm, ‘Storm Frank’, was forecast by the Met Office. (Although the MWIS forecast above gave little indication of the amount of water that actually fell in Glen Feshie in the 24 hours we were out.)

So it clearly made sense to stay low and plan a short walk in along a good track to a cosy bothy. What could possibly go wrong? Well, as it happened, quite a lot...

The plan was formulated to head into Ruigh Aiteachain bothy in Glen Feshie from the road end at Achlean. A few kilometres on easy tracks with a return the following morning and out for breakfast in a local café.

Kit was packed according to the plan: old clothes (for chopping wood, didn’t want to damage that expensive Gore-Tex), a nice supper with liquid refreshment, and all the overnight accoutrements for a comfortable night in the bothy.

What we didn’t have were suitable boots, crampons or ice axes to go high. We also didn’t have a map or compass as the route to the bothy was a familiar and straightforward route. Neither were we dressed in our good waterproof garments, or carrying gloves and hats for high level travel. Why?  Because we had zero intention of leaving the glen.

The walk in was uneventful, taking around 1.5 hours, and we arrived to find four young lads in residence, plus kit from two others who were out on the hill. (These turned out to be members of the RAF mountain rescue team, who arrived back later after a good day on the hill.)

I was very aware during the night that it was raining HEAVILY, in fact so heavily that a) it kept waking me up and b) I started worrying about the river crossing between the bothy and the road end. I was up at 7am, dragging my partner out of his cosy sleeping bag and we headed out, early, still dark.

The ground immediately outside the bothy was flooded and within half a kilometre we were forced to turn back after reaching an uncrossable burn which the evening before had been barely noticeable. Back at the bothy, I persuaded the two RAF boys to pack and head out with us so we could assume a ‘line astern’ with four people to cross the first hurdle.

We crossed the first challenge, carrying Milly the dog on our shoulders, and proceeded to the major challenge: the outflow of Coire Garbhlach. As predicted it was a complete show stopper: there was zero chance of crossing it. Any slip would have had fatal consequences.

Breakfast was looking like a dim hope on the horizon as we trudged back towards the bothy, at times thigh deep in the flooded glen.

The decision had to be made. Do we return to the bothy, where we would be safe but had no food and no dry clothing? Or do we push up over the top onto the Moine Mhor around the head of Coire Garbhlach, which reaches an altitude of 950m, with no suitable kit and extremely severe winds forecast?

Our group of four decided to stick our noses into the high level option based on the strength and experience of the group. With a caveat that we would all turn around if any one of the group was unhappy.

Then we met the four lads from the bothy who, realising the plight of the situation they were in, had also left the bothy early in the hope of getting back to civilization.

Now, entering into a challenging environment with known skills and experience is one thing, to enter into it with four ‘unknowns’ is quite another, but that’s what we did. (Not my brightest moment!) As we ascended the land rover track to the south of Coire Garbhlach, the map that the young lads had with them blew away! However, luck was on our side as the mist cleared, allowing navigation across the Moine Mhor without map and compass. And, surprisingly, the winds were not as bad as forecast, although bad enough to really hammer us as we descended down the track from Carn Ban Mor.

The easy walk back to Achlean which should have taken 1.5 hours, took around six. We had no food, no breakfast before we left and no drink.

It would have been very easy for one of the party to have hurt themselves during the descent in high winds as we were battered like leaves in a gale. Equally as we committed to the featureless crossing of the Moine Mhor the visibility could have dropped, leaving us floundering with no navigation tools.

On hindsight, perhaps it would have been wise to sit it out in the bothy until the floods subsided.

Footnote:  You may well recall ‘Storm Frank’ as the weather event on 30th December 2015, which flooded Ballater and resulted in a huge amount of destruction.