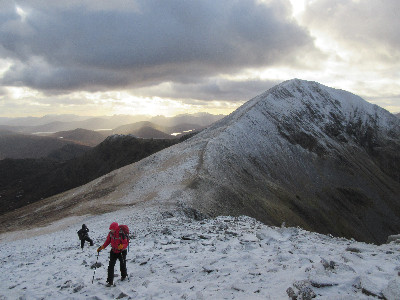 I set off from Aberdeen at 2.40am, as I was just finished work (got in two hours’ sleep during work), to meet up with Davy at Fersit to walk The Easains. We planned for a 9am start thinking we should have plenty daylight in that: David moves quick, I just try keep up. The weather was to be good in the morning and start changing around 1pm, so we were hoping to get some views too.

It was still snowing heavily as I left and the Aberdeenshire roads were not great until after Huntly and a few miles from Dufftown, snow drift making this the worst of the drive over. I parked at the lay-by for the turn-off to Tulloch station just as it started snowing again. I texted David to meet here and we would see what the road to Fersit was like a bit later. I managed to get asleep fairly quickly.

I woke at about 8.20am and started to get gear on. There wasn’t that much snow on the roads, and soon David passed by and spotted me. After saying our hellos, we drove for the parking space near An Dubh Lochan and were ready for the off within 10 minutes. Soon we were climbing over the fence and decided to take direct route up to Creag Fhiaclach and head along ridge towards Meall Cian Dearg. As we walked towards we discussed the best way to get over Meall Cian Dearg; we had read that there was a path to the left but this was not visible for the snow. It’s a fairly steep climb up this part just below the nose and we took off to the right just below the crags with Coire Laire to our right. As we made our way across we could see where we wanted to get to, just below Coire Shomhairle, but it didn’t feel right walking across this section of snow and we both decided it wasn’t safe, so returned to the other side, looking down onto Loch Treig, and found a section to climb up, with one part needing extra care. Soon we were up onto the broad ridge with Stob Choire Mheadhoin in front of us. We were smiling again, but knew this had cost us an extra bit of time and energy. On we went, taking a few photos with the Grey Corries to the west and Sgriodain to east with Chno Dearg.

The weather had given us some good views so far, but that was about to change. As we got to the first summit we could only see a few feet in front of us. We took our snaps of the top and moved on to the next one as we knew the snow and wind had slowed us down a lot and we wanted to be walking off the ridge before darkness. At the bealach we saw where the route off was, as described from my Munro book by SMC. Climbing Stob Coire Easain was like walking up a wall. Now energy was really sapped, so we had a little bite to eat and were away again.

It doesn’t take long to descend off this one and back at the bealach we had a look at SMC's route off, but it was just a cornice all the way round so we decided against it. We had a look to the right towards LochTreig, but since neither had read about a route off this side we decided against it, although it did look inviting. We headed back over Mheadhoin, down the other side and started walking up over the 978m top. But now the weather really changed for the worse and so when we started walking on level ground we thought we were heading back in right direction I had GPS out and we were following the route by arrows as we couldn’t see a few feet either side and weren’t sure if we were getting close to the edge. At this stage battery went flat, so we quickly switched to the spare and tried to take up the path again, but we seemed to be rising and were sure we should have been on level ground.

The weather was so bad now we decided to take cover under a bivi shelter to see if it changed and if we’d be able to figure out our location. When outside the bag it could only be described as blinding – not just the wind but the whiteness, my first experience of this. I got back in and said we wouldn’t be going anywhere in that.

The decision was made to contact help. I rang another mate, Dave, who I knew was walking in Laggan and would still be about the area. He said he would contact Lochaber Mountain Rescue and make his way to our cars. At this time David was ringing his wife to let her know his situation, and if she could get us a number for mountain rescue. She rang back to say ring 999 and ask for mountain rescue. However Lochaber MRT rang my phone after being contacted by Dave, so we were both trying to talk with this howling wind and bivi shelter going like the clappers with no one getting any info. The team said they would contact my phone as it was getting a better signal. What they wanted to know was if anyone injured, how we were for clothing, and if we had enough food and water. They knew the weather was bad but wanted to know how serious. I replied that we were getting battered and he said: “Yeah, it sounds it.” Last question was “What’s your position?” We weren’t sure, but gave out where we thought we were. As it turned out later we weren’t too far away from the reference we gave. “Right,” he said, “We'll ring back when we make a decision as what to do. In the meantime try dig a hole.”

I didn’t want to leave the shelter. Every ten minutes we looked down and our legs were white from the knees down with the snow blowing up underneath the bivi. Now I could see my phone starting to get wet under the screen and then start flickering, and eventually it packed in. David had only 26% battery life left in his phone.
When the rescue team couldn’t contact my phone they got David and told us to prepare for a night up there as they couldn’t come up without knowing exact location in those conditions, which is understandable. But as we were sorting ourselves out we got another text saying to turn on GPS on phone and click the link in text message; this located our exact location and the rescue team then rang back to tell us to follow the compass due north, which would take us into glen. We thought it might be leading us to where we were earlier in the day, but the rescuers reassured us it was a safe route off.

It was if they pressed a button on the remote-control and somewhere energy came back into the body. We packed up, head torches on, and followed the compass off the hill, down through the deep snow. Eventually we could start making out the ground again – somehow the near-full moon was getting through the dark clouds. We made our way back towards the cars, walking just beneath Creag Fhiaclach to get to the Loch. By this time I was falling every few steps and wanted to just lie down and sleep. David encouraging me to keep going, but every step felt like knee-deep bog. I told him to go ahead a few times and he refused each time, but when we got nearer the cars he went on and said he would try drive up a bit nearer me. I stopped and wanted to sleep there on the ground, so I took some more food, and last few steps in me took me to the road, where a Police 4x4 was waiting with David in the back. The Police took a few details and dropped us back at our cars, and when we stepped out Dave was there to meet us.

We went into Roybridge to try get some hot food but it was a bit late, and we then went back into our cars to head our own way, each just wanting to get home or some sleep. As I drove home had to stop before Laggan and again near Grantown of Spey to sleep, getting about five hours between both stops, arriving back in Aberdeen just after 8am.

LMRT for staying in touch with us through the hours up there, always looking for a solution to get us off there and not stopping till they did.

David for having the energy to keep himself going plus giving me the encouragement to keep going too.

All the walkers we know who were rooting for us out there for a safe return. It was nice to read all the comments next day.

In a way I'm glad to have experienced this because I learned a lot about mountain safety from this.