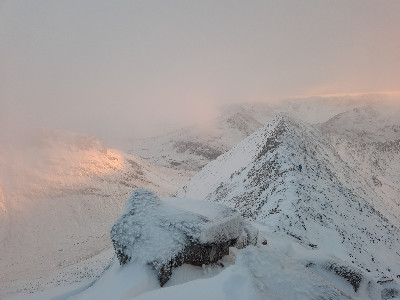 This near miss was sent to us by Mountaineering Scotland member Chris Wood, who was able with his climbing companion to get a group of inexperienced walkers out of a potentially serious scrape on the CMD Arete.

On the weekend of Storm Arwen, I was in Fort William with a mate. On the Sunday (28th November), since the weather had cleared and the forecast was good, we decided to do Ledge Route and come back down via Carn Mor Dearg. We left the North Face carpark about 0720, made our way to the CIC hut, and got up Ledge Route with no issues apart from an early bit of route finding. Really decent conditions - lots of soft snow with no icy sections – and a relatively easy ascent.

We had lunch in the summit shelter, and then descended the shoulder to the Carn Mor Dearg Arete. We saw a group quite a long way ahead of us and after about 20 minutes realised they were coming towards us, but very slowly. We reached them about 300 m short of the summit of CMD itself - it was now 1430. They were spread out over about 50 m, so we had a chat with the guy at the front and pointed out sunset was in less than 1.5 hours, and they were moving pretty slowly. At their current rate they'd probably still be on the ridge as it was getting dark.

We convinced him, and he convinced his friends when they caught up, that they should turn around. The group was three guys in their 20s. Given their obvious lack of experience, my mate and I thought we should stay with them for the walk down. One of the group seemed particularly uncomfortable on the ridge because of the exposure and the snow, and it took more than 30 mins for all three of them to get back to the summit of CMD.

Given that sunset was now fairly soon, and the distance we still had to cover, I decided to take a pretty direct route down to the main track leading up to the CIC hut, rather than trudge through the snow over to Carn Beag Dearg. However, the three guys were so uncomfortable and unused to moving in those kind of conditions that the descent was painfully slow, even with me breaking trail and making steps for them all to follow. It took until about 2030 to get them down to the main path. Once on that, they were a bit happier and moved a bit faster. We got back to the carpark at just about 2300 (at which point I then had to drive back to Edinburgh).

From the time we spent with them, we found out:

- they'd hired boots and crampons in Fort William - I didn't get round to asking them how they were planning to return them
- they hadn't left the carpark till about 10
- for the two who lived in England, this was their first ever Scottish mountain - the other guy said he had about 20 days of experience, but had done virtually nothing in winter.
- they had one headtorch between the three of them
- no flask
- carrying a rope but I don't think they really knew how to use it
- very small rucksacks
- very little extra clothing / no spare gloves


It was a standard example of how relatively inexperienced walkers underestimate how difficult a route will be, and how much longer the journey will take as a result of both the snow and the scrambling.
I think that despite the press releases that Mountaineering Scotland puts out every year, either these don't always reach all the people who should take heed of the advice, or they think that the warnings don't apply to them.

In this instance, several human factors probably played a role:

- expert halo (relying on the decisions of those perceived to have more experience, skill, knowledge or assertion)

- Consistency (propensity for someone to stick with prearranged decisions – those often focused on timelines, routes and descents) - the group didn't appear to consider the possibility of turning back until we advised them to. They hadn't really thought about how much more difficult the ridge would be if they continued, and were still on the ridge at nightfall