Blah Blah Blah
No crampons on Beinn an Lochain 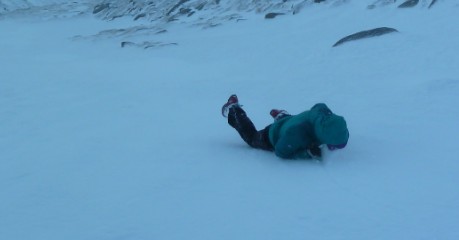 It was a benign winter’s day in mid-January 2001. I was in my mid-twenties and, having left the car at Butterbridge, I started the climb, excited about the solo prospect of conquering the two hills on opposite sides of Glen Kinglas; Beinn anLochain and Stob Coire Creagach.

Heading up Beinn an Lochain’s steep northeast ridge, the snow level was reached at around 400 metres, with thinly dusted rocky outcrops alternating with knee-deep drifts punctuated by well-established boot holes.

My rucksack’s contents were packed from experience, with more than a nod to Langmuir’s Mountaincraft and Leadership book, and my ice axe was a particularly useful third point of contact on the ascent.

At around 600 metres, a short icy stretch was negotiated by kicking steps, before the sections of alternating drifts and dustings took me to the summit. The views from the summit were spectacular, as they are from each of the Arrochar Alps, and I enjoyed 10 minutes of solitude and contemplation before the descent to Butterbridge for lunch. After passing a couple just below the summit I reached the icy stretch and spoke to a chap who had just reached the top of the slope by means of kicking steps. I remember vividly him asking me if the top was icy and I informed him that this was really the only icy section on the climb.

I turned around and started descending the icy slope, digging my heels into the ice, when both feet gave way and I started sliding.

The slope in question is around 50 metres in length, lies roughly at an angle of 45 degrees, and ends in a vertical drop of 50 metres on to an area of boulders plucked from the cliff face.

I still remember the whine of my jacket on the ice increasing in pitch as my speed picked up, and it was my good fortune that the wrist loop on the ice axe held while the training from the Winter Skills course at Glenmore Lodge kicked in, and I was able to arrest myself using the axe with less than 10 metres to spare.

I got to my feet and looked up the slope to see the chap I had spoken to seconds earlier wave before heading upwards –perhaps he thought I had been practising!

The descent was completed without further incident and a refreshing lunch enjoyed before I started the climb on the north side of the glen. It wasn’t until around a third of the way up Stob Coire Creagach that the shock of the near miss finally hit home.

I’ve spent a lot of time reflecting on the choice I made that day not to wear crampons for the short icy section, and how different the outcome would have been had I not taken the training course in winter skills. I’m fortunate that I can pass this experience on to my kids and if there’s any doubt at all now, the crampons go on.