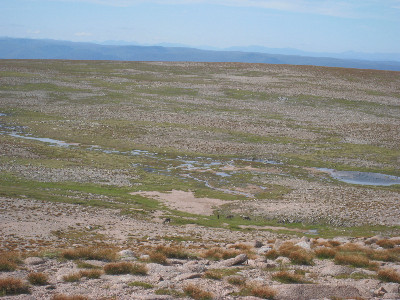 It was all a very long time ago, back in the ‘80s, but the lessons are still real: don’t forget that blazing sunshine and heat CAN be a problem in Scotland’s mountains; don’t panic or rush when things start to go wrong; remember that just one incident can led to a whole chain of errors, and always take proper time to navigate. Oh, and don’t mistake having spent lots of time in the hills with other folk leading for being experienced yourself.

It all started with someone else’s accident. I’d planned a big walk in the Cairngorms with a pal who was fit but even less experienced than me. We’ll call him John in the tradition of these things. The plan was to walk in from Linn o’ Dee and camp in Coire Bhrochain of Braeriach on the Saturday. On Sunday we’d go up onto Braeriach and traverse the tops to Cairn Toul, then down past Corrour Bothy and back to Linn o’ Dee and home. I’d done bits of it before over the years, though never in a oner. But we were both in our early 20s, when anything seems possible.

Saturday went well, maybe a bit on the warm side, and we were through Luibeg and over into Glen Dee without any trouble. That’s where we met the guy running. He and his friend had been descending Braeriach and his companion had stepped on a patch of old snow, slid several metres and collided with some rocks, injuring his leg. This was many years before mobile phones (though there’s still no signal in that stretch of the glen) so our running man would have to go all the way to Derry Lodge to find a phone.

We kept on going, then stopped when we reached the injured guy, who had managed to reach the path but eventually had to give in. We chatted for a bit, but he was starting to shiver, so we put up our tent a few yards away and helped him into it. By the time the helicopter came and carried him off it was too late to think seriously about getting going again, so we spent the night in the glen, about 4km and some 500 metres or more short of the plan.

Morning dawned fair. More than fair – it was boiling. By the time we started up the south-east shoulder of Braeriach we were already toiling under our over-heavy rucksacks and the steep, pathless ground made laborious going. It was probably around noon before we collapsed at the summit cairn of Braeriach. The sun was baking and even on the plateau it was completely windless: an experimental match burned without even a hint of flicker. The plateau is also completely devoid of shelter and in the midday heat we were really suffering: no hats and not enough water.

We walked on round towards Einich Cairn but the heat was unrelenting; it was more like walking across a desert than climbing among mountains. I was feeling it badly, but blond-headed John was really suffering. I didn’t know much about heatstroke back then, but I was starting to get worried. He had little energy and was lethargic, needing urged on.

I decided to miss out Sgor an Lochain Uaine and Cairn Toul and to head straight down to Loch nan Stuirteag and down Glen Geusachan. It was still a long way out on a hot day, but it did mean no more climbing and some possibility of cooling down.

The trouble was I’d never been that way before and I was quite rattled with my concern for John’s wellbeing. I could see a loch with a stream to the left cutting down into a glen below. I took the map and compass out, had a quick check of the bearing and confirmed it was Loch nan Stuirteag, with the Allt Clais an t-Sabhail on its left, cutting down to Glen Geusachan.

Only it wasn’t. The bearing was hurried and careless, and I didn’t look closely enough at the map to realise that Loch nan Stuirteag wouldn’t be visible from where we were. It was the smaller Loch nan Cnapan and the Allt Luineag I was looking at, and we were headed down the River Eidart.

For a long time I was just puzzled, and by the time I realised what had happened it was too late to contemplate reversing our steps. We’d added a good 10km onto what was already going to be a long day with big sacks – and, because John was going even more slowly than me and refusing to eat, it was after 3am before we reached the car.

On the face of it, it was a simple (but massive) navigation error, but in fact it was a chain of events which started when we stopped at the injured walker (And who knows when his chain of events set in motion?). That meant we not only gave ourselves a longer walk on the Sunday but were also climbing during the hottest part of the day with hardly any water. Allowing myself to be unsettled about John’s health (caused in part by his lack of a sun hat) meant I rushed that all important confirmation of our route. A closer look at the map as we came closer to the loch would have revealed all was not well too, but by this time I was heads down in eagerness to lose height as quickly as I could.

In short, there was one incident which we could not control – the other walker’s accident – but the rest was down to poor planning, poor decision-making (was it even wise to have gone as far as the top of Braeriach in that heat?), poor navigation and that so often deadly combination of inexperience and overconfidence.

In the end we missed a meal, had to walk until 3am and didn’t get home until 5.30am. And John had to take a day off work. Which was getting off very lightly all things considered.