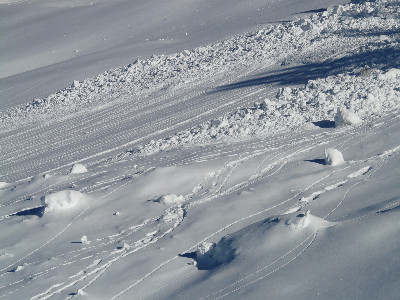 It was just after Christmas 2010. It had snowed on and off all through December, and the weather had been lovely for several days. Perfect ski conditions too: fresh powder, sunshine, good visibility. I decided to head up to Glen Shee and tackle a couple of the hills near the ski centre.

I’m a walker not a climber, but I’d done a winter skills course and I’d done several winter days before, including an epic trip up Ben Nevis via CMD aręte. So Glas Maol didn’t look in any way a difficult trip. Park at the ski centre, straight up the piste and then the summit above it, then round the ridge to Creag Leacach. Retrace your steps, down the piste, hot chocolate awaits. The weather forecast was good. The avalanche risk was Considerable, but this report covers all of the Southern Cairngorms report, and Glas Maol is the southern edge of the region and nothing like as challenging as the rest of the terrain covered by that forecast. Really nothing to worry about.

We - the dog and I - arrived about 10am having been stuck in the ski traffic. There were plenty of skiers already out, and the car park was filling up. Deciding that taking a ski lift was cheating for a Munro-bagger, we set off to walk up the edge of the piste to Meall Odhar. Nice going with a few inches of fresh powder and pretty solid snow underneath. From Meall Odhar, the top of the last lift, it was a straightforward pull up the last 150m or so of vertical distance to Glas Maol with a wonderful view down to the ski centre.

Having climbed up ESE, from Gas Maol we descended SSW, initially down a broad slope, heading for the bealach at about 900m where the ridge narrowed and began to climb again. The snow had settled here, well above the skiing, so it was knee-deep plodding some of the way. But no difficulties of any kind. The ridge is unprotected by pinnacles or anything of that sort, and doesn’t really get narrow at all. Once we started climbing up to Creag Leacach the ground was firmer and the going good. I had crampons and an axe and felt confident about my skills.

After lunch on Creag Leacach I headed back down to the bealach. From there it was just a matter of wading up NNE through the deep snow to Glas Maol and then down NW to the piste. Or, I could just cut the corner, going NNW. That meant traversing diagonally off the ridge. It was steep but I could see from the map that it was a steady slope, with no cliffs or boulders, and with perfect visibility I could see pristine snow all the way across. Taking the short-cut was all upside: no having to wade through deep snow, saving time, avoiding an unnecessary climb, and being able to pretend I was Chris Bonington traversing K2. The one thing I didn’t think of was what I learned on my winter skills course about the aspect and steepness of slopes which are more prone to avalanche. I was about to traverse the textbook example of an avalanche-prone slope, with pretty much textbook snow conditions underneath.

So off the ridge we dropped, heading diagonally towards the top of the piste. A few minutes going across, I noticed there were chunks of snow skittering off the surface at each step. This time I did remember my winter skills course, about how this indicated an unstable snowpack. But by then I was committed. I mean, I actually wasn’t: I could easily have climbed back to the ridge. But in my head I had made my decision and was going to stick to it. Ten more steps and the snow under my feet gave way and I was on my back skidding down the slope through the powder. I got my ice axe in, and almost stopped. Then that snow also gave way, and I was off again, though this time not so fast. I got my axe in hard, and hung on to it, as snow thundered past me from the slope above. It was not the biggest avalanche ever, perhaps only 6 inches depth, so I was left covered in snow but not buried. I picked myself up, got my crampon points into the hard snow underneath, and breathed a sigh of relief.

Then I remembered the dog. Ten seconds of panic before I saw her a couple of hundred metres below me. I’m not sure if she’d been pushed down the slope by the avalanche, run down ahead of it or surfed on it. But she was moving and seemed fine. She refused to come back up the slope though, probably with good reason. I figured I risked another avalanche if I walked down to her, so I carefully climbed up to the ridge on my crampon points. Once there I walked along the ridge watching her walk parallel to me far below.  When she reached the piste she patiently sat and watched the skiers while I made my way down to her, chastened and trying to decide how much of this I would tell my wife. Not much, I decided: she’s very fond of the dog.

I take away two lessons from this. First, especially in winter it only takes a moment of carelessness for your day to go horribly wrong. It doesn’t matter if you have all the experience in the world if you are not using your brain to think about the dangers around you. But second, I got out of this because my ice axe arrest worked. So I was glad I had the winter skills even if I should have used them to avoid the avalanche rather than survive it. Most importantly, the dog forgave me, though her arthritis means her mountaineering days are now over.