Blah Blah Blah
Too much trust on Aonach Eagach 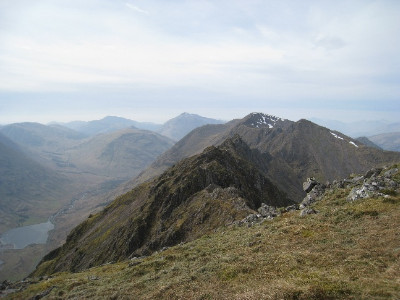 My tale is one highlighting the fact that you should do your own research rather than putting all your faith and trust in someone else.

I met this new man. He booked our first weekend away together at the Ballachulish Hotel. I had done about eight Munros and was so excited that he seemed so experienced in the hills. I have to admit he had mentioned the Aonach Eagach ridge a few times, and much as I didn’t know too much about it, I had been to the funeral of a man who had fallen to his death from it. I wasn’t exactly keen but had recently done Striding and Swirral Edge on Helvellyn. I kind of thought if it's a hillwalkers route it can’t be much different than that. And my experienced new man had done the ridge twice before.

Anyway, we got up in the morning and the weather wasn’t great, so we decided on a chill-out day but after a late breakfast the hills started to clear and we could see that there was a light dusting of snow on the tops, and all of a sudden we were going to do it. I didn’t seem to have any choice.

We left the car at about 12 o'clock on the 24th of November 2012, but that was fine he said, it would only take four hours and we could easily walk off in the dark!

The snow was much deeper than expected but he didn’t seem concerned in the slightest. We had no crampons or ice axes. He did have a small length of rope. The first down-climb scared me half to death but he assured me once that bit was over it was all plain sailing.

The main bits I remember are the chimney where he tied the rope round my waist and the pinnacles. We got to the first pinnacle and watched a beautiful sunset. Then my fear really kicked in. I don’t think I said very much, just went very quiet. I'm pretty sure it was a blessing I couldn't see the drops. On the last pinnacle he climbed over to see what was on the other side, always telling me this is the last scary bit. I was left gripping on but with a huge urge to jump. Sounds dramatic but throwing myself off seemed favourable to staying up there. When he appeared back I remember saying I need the helicopter, and him replying, we are not phoning mountain rescue so you'll just have to get on with it!

I did it and I survived but I really suffered with trauma of it. I was pushed way beyond where I thought my limits were. I will never ever go out in the hills again without going through everything with a fine-toothed comb, to my own detriment sometimes. It took me about four years to get over it. I have since done a navigation course and, though I still make mistakes, my confidence is growing and I am now up to 89 Munros and lots of other hills in between.