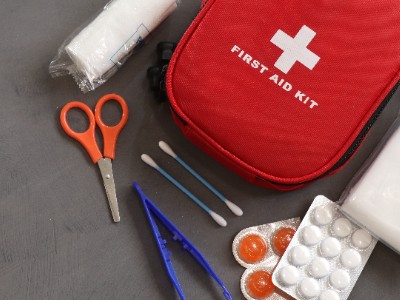 I suspect most walkers take some form of first aid kit with them when they go out. I always have one as a lightweight and small package provides a certain peace of mind. Again, like most hikers, I’ve had to use the odd plaster and my water filter from time to time but nothing more than this.

About a month ago, I had a week’s leave and had scheduled a series of four hikes taking in a bunch of hills across the West Coast and Highlands that I was greatly looking forward to. The first day was wet and very windy but refreshing as temperatures were unseasonably warm for October. The next hike was on an incredible summer-like bluebird day that, despite still being damp from the previous twenty-four hours, was a fantastic contrast to the first walk. Even better, our holiday apartment was only an hour and a half away from the start of the route.

I wasn’t taking the usual trail for the two hills I planned to climb which meant I had a fence to negotiate just half a mile from the car. The slightly higher than normal solid fence had a wooden rail along the top. I lifted myself up on to the wooden rail and had one leg on it in preparation for swinging round to drop down to the other side. My foot however slipped on the damp rail, and I dropped back down to the side I started on clattering my legs on the fence but landing on my feet. I didn’t think anything of it and repeated the process easily flipping across to the other side of the fence and continued walking. I quickly realised that my left leg was very wet, but I couldn’t see blood yet as I was wearing black trousers. I touched my trousers, and my hand came away completely red. Starting to worry, I then lifted my trouser leg and found a six-inch gash along my calf with blood literally pulsing out from the deep wound and filling my boot.

My leg had clearly suffered a penetrative injury when I dropped from the fence and I was trying not to panic but my thoughts immediately leapt to am I stuck here, and will I bleed out before I can get professional help. With my rational mind re-engaged; I discounted contacting the emergency services as what I needed was some immediate first aid attention. I did look around for assistance and shouted to a fellow walker who had just appeared a short distance away. Despite my distress, the best I could get from him was ‘it often looks worse than it is’ and he didn’t even bother coming over to check that I was ok. I was surprised and do not think for a second that this is a typical response within the hill walking community. With that rejection, I pulled out my first aid kit, emptied the contents on the ground and found the only remotely suitable bandage I had.

While I had non-adhesive wound dressing pads, I was much too shaken and there was too much blood to apply anything tidy to the wound. Even the safety pins were useless and just bent when I tried to put them in the bandage. I ended up pulling the bandage tight across the deepest part of the gash like a tourniquet and tying it with knots to avoid it riding down my leg. This immediately slowed the bleeding and I felt confident enough to hobble with my poles the short distance back to my car after negotiating that ‘bloody’ fence again. Leave no trace is ingrained in my mind so I did manage scoop up all my bloodied first aid bits and pieces and my now claret splattered rucksack.

Once back at my car, I tied a clean t-shirt round my trousers and thought about taking my boots off, but I really didn’t fancy doing anything that would require additional leg movement. With an automatic car, I already knew I would be able to drive with my left leg immobile, but I did take in some big gulps of air as I had been feeling nauseous and wanted to make sure that the worst of the shock was wearing off and that I wasn’t feeling faint from blood loss. At this point, I realised I hadn’t even considered which hospital I would go to but remembered that the GPS in my car had a locator and I looked that up and started driving the forty or so miles towards the nearest accident and emergency ward. I encountered some traffic and fought the urge to overtake manically knowing that it typically only saves minutes and was not worth the risk.

Within a couple of hours of the slip, I was in accident and emergency feeling a bit foolish registering to have my leg seen to. The medical staff confirmed that it was a deep gash, would require stiches and would take some time to heal. As always, the NHS staff were fabulous, and I slowly left the hospital with half a dozen stiches, a tetanus jab, and a leg that I could only really use as a crutch – I could feel any stretch of my calf pulling at the stiches in my skin, so a straight leg hobble seemed best. This was the last day at our holiday apartment, so I had to drive two and half hours back to pick up my family and then another three hours home. Not ideal after an eventful day but at least we had plenty to speak about. I was exhausted when I got to our house, but I did have the benefit of the rest of the week at home while I kept the weight of my feet.

The stiches were pulled out two weeks after they were put in (ouch!) and a further two weeks after that I still have a sizable gash healing on my leg. After four weeks, I sneaked out and hiked up a nearby Graham with my brother in tow to see how much force I could put on my calf, and I’m delighted to say it passed so I’ll try a Corbett this weekend. I’m finally confident that there is no permanent damage and happy to put it down an unfortunate freak accident.

Reflecting, I suffered numerous accidents that needed stiches as a child (including one on the same calf!) so I was a little surprised how shocked I was thirty years later when I had a similar accident, but it did get me thinking. Not so much about lone hiking which I really enjoy but more how poor I felt my first aid kit was. It was not up to the job of applying a field dressing and it would have been even worse if the conditions were not as benign as they were. Having looked in to this a little, I have now added an Israeli field dressing to my new fold-out first aid kit that has elastic straps to keep everything in place.

The Israeli dressing is an emergency bandage that is specially designed to stop bleeding from traumatic injuries in pre-hospital emergency situations. It can be applied with one hand and has a closure bar to easily secure the bandage. I am sure many will think that serious field dressing is excessive for a hike, but it can be used on your head, limbs or body so is genuinely multi-purpose. My new first aid kit is big enough to keep the usual first aid bits and pieces, along with the replacement items, a few additions and even my head torches which stops them being switched on accidentally when loose in my rucksack. Hopefully, my new first aid will never need to be used, but better safe than sorry.

You can find out more about first aid in the mountains here.