Mountaineers, mountain lovers and path-builders unite to raise funds to restore routes up two of Scotland’s most popular Munros.

Mountaineering Scotland and the Outdoor Access Trust for Scotland (OATS) are leading a campaign to raise Ł100,000 to support two essential Scottish mountain path projects: Beinn a'Ghlo and Ben Vane. With one project in each of Scotland’s two National Parks, this is part of a GB-wide initiative, Mend Our Mountains: Make One Million, coordinated by the British Mountaineering Council (BMC) in collaboration with 15 National Parks, sponsors Cotswold Outdoors and Snow+Rock, and Scottish media partner, Walkhighlands. Find out more or donate now! 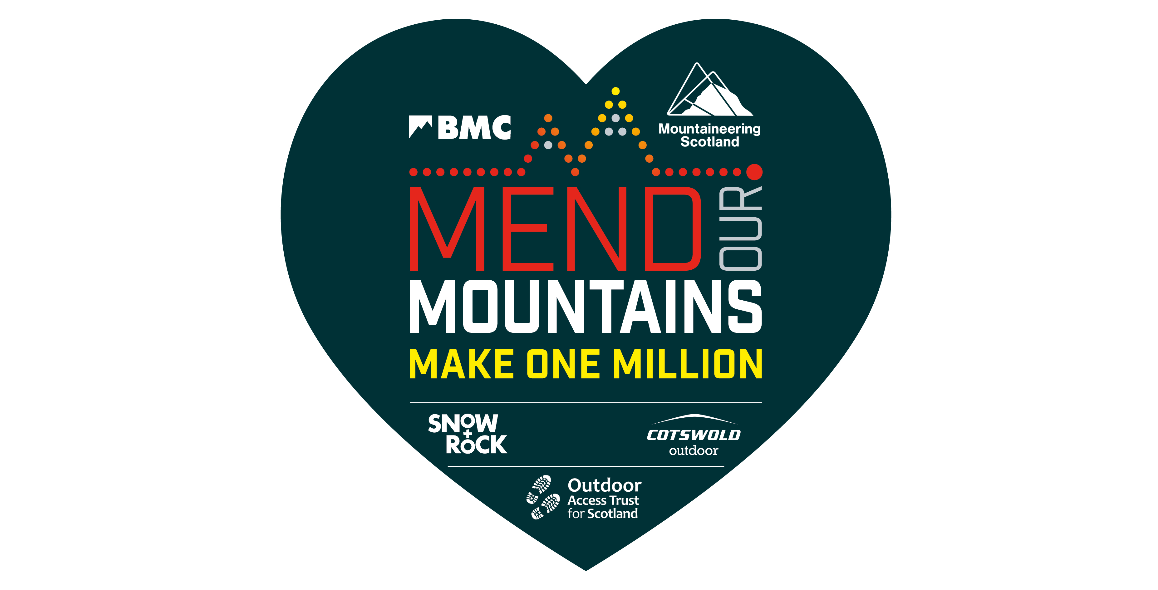 Beinn a' Ghlo, a Cairngorm gem

The first target is one of the nation’s most heavily eroded mountain paths, a highly visible scar up the slopes of Beinn a’ Ghlo, the great three-Munro massif in the south of the Cairngorms National Park.

The campaign aims to raise Ł60,000 for this project, which will sustainably and sensitively restore the route up Carn Liath, which is currently so wide it is visible from several kilometers away on the A9 road north of Blair Atholl.

The second target is urgent path repair work on the popular Arrochar Alps peak, Ben Vane, in the Loch Lomond and the Trossachs National Park. Despite claiming Munro status by a mere two feet, Ben Vane’s location within an hour or so of Glasgow has made it one of Scotland’s most popular mountain walks.

Ł40,000 is required to create a long-lasting route up this well-trodden if steep mountain, whose path experiences significant damage, particularly in wet weather.

There is now an even easier way to contribute to this worthwhile appeal – you can text a donation to the Scottish projects (it will be divided equally between Ben Vane and Beinn A’Ghlo projects). Write MOMS01 followed by the amount (in format Łxxx) and send the message to 70070.

Do you buy things through Amazon? If so, you can choose to raise money for the Mend our Mountains campaign – with no extra cost to you – every time you make a purchase. Switch to Amazon Smile and Amazon will donate 0.5% of what you spend to your chosen charity. Its very easy to do, click on Amazon Smile and select “BMC Access & Conservation Trust”.

The Society, which is open to anyone who has climbed all the Munros, has supported Mend our Mountains with a donation of Ł3 for each of their 300 members – and then topped it up to make Ł914.40, that being pound-for-metre the metric height of a Munro.

We have teamed up with Craigdon Mountain Sports, Edinburgh, to bring hillwalkers a new mountain safety and skills talk this spring. Our Mountain Safety Advisor, Heather will offer loads of great tips for beginners and more experienced hillwalkers alike. All the proceeds from ticket sales will go towards the Mend our Mountains appeal.

Craigdon Mountain Sports, Edinburgh, the venue for our Spring Skills for the Hills Talk.

We had a great day on Ben Ledi where our Mend Our Mountains partner The Outdoor Access Trust for Scotland (OATS) was highlighting the MoM appeal – at the same time as celebrating the halfway point on their own flagship project, The Mountains & The People. 170 people braved the elements to take part in an informal family walk on a path recently repaired by the Mountains & The People project.

Make a difference, make a donation...

In a recent survey of Mountaineering Scotland’s members’ views on mountain access and conservation, respondents placed a high value on the condition of mountain paths, with fundraising for restoration, repairs and maintenance of hill access being rated as one of the organisation’s top priorities. In joining forces with OATS and the BMC on the Mend Our Mountains: Make One Million campaign, Mountaineering Scotland hopes to give hillwalkers and climbers the opportunity to put their money where their mouth is. It needn't be huge amounts - if everyone who uses the hills donated just the price of a bobble hat, we'd have more than enough.

David Gibson, Mountaineering Scotland CEO said: “By making a donation, however small, this is a real opportunity for everyone who values Scotland’s mountains to make a difference to the quality of the mountain experience on two much-loved Munros. OATS works to the highest standards and you can be assured that your money will be well-spent supporting this appeal.”

Both the Scottish fundraising targets are also part of the ‘The Mountains & The People’ project, which represents the coming together of Scotland’s two National Parks to work on access improvements at a scale never previously attempted. It is a partnership led by the Outdoor Access Trust for Scotland (OATS) in conjunction with Loch Lomond & The Trossachs National Park Authority, Cairngorms National Park Authority, Scottish Natural Heritage, Forestry Commission Scotland and the Heritage Lottery Fund (HLF).

Dougie Baird, Chief Executive of OATS said: “These are two of the most eroded paths in the UK, and repairing the damage will be so important for both the landscape and the visitor experience. With public funds under so much pressure, it is vital that the public support this type of work and we hope that those who care for the mountains will take this opportunity to give something back.’’

Walkhighlands, the busiest walking website in the UK, has become the official media partner for the Mend our Mountains: Make a Million campaign in Scotland.

Walkhighlands’ founders Paul and Helen Webster explained: “The eroded routes up both Beinn a' Ghlo and Ben Vane need urgent repairs to heal the scars on the mountain. We hope all hillwalkers will help by contributing what they can to help this vital work which will prevent future damage."

Find out more or donate now